The County Assembly of Kitui is one of the forty seven (47) county assemblies established by the Constitution.

MEMBERSHIP OF THE ASSEMBLY

THE LEGISLATIVE AUTHORITY OF THE ASSEMBLY

According to Article 185 of the Constitution, the legislative authority of Kitui County is vested in, and exercised by, the County Assembly of Kitui.

THE MANDATE OF THE ASSEMBLY.

ROLE OF THE ASSEMBLY

According to Section 8 of the County Governments Act 2012, the roles of the Assembly include;

The County Assembly of Kitui is committed to ensuring that the County Government works for the benefit of the people of Kitui. 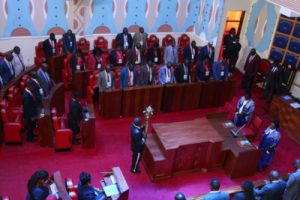 Speaker Hon Kevin Kinengo and members of the Assembly Liaison committee today finalized the preparations for the vetting process of the CECM for Education and the 26 Chief Officer’s nominees. The Speaker confirmed receipt of all due diligence reports and assigned the said reports to the relevant committees.

The vetting interviews will be done on 30th and 31st January 2023. Thereafter the committees will retreat for report writing

THE VETTING EXERCISE FOR CECM NOMINEES KICKS OFF.